Global electric vehicle (EV) sales remained solid in the first half of the year despite growing concerns of global economic slowdown, customer affordability after EV price hikes, and covid-19 resurgence in China which led to lockdowns in Shanghai in April and May. EV penetration in China, Europe, and the US has been accelerating on the back of surging oil prices and the energy crisis (Exhibit 1). On the policy front, China announced an auto purchase tax cut to stimulate auto sales. An increasing number of local governments have joined to provide subsidies for auto purchase or replacement, especially for electric vehicles.

Higher global EV penetration year-to-date is forcing companies, including car makers and component suppliers, to accelerate their EV transition (Exhibit 3). With current high energy prices, the total cost of ownership in the US is lower for hybrid EVs and battery EVs, compared to gasoline-powered vehicles, especially with tax incentives.1 The launch of new EVs by automakers around the world, and front-loaded demand in anticipation of further price hikes for EVs have also supported this structural transition.

Commodity price inflation was another key focus during H1 2022, leading to price increases in EV battery-related materials. While prices of battery metals appear to have peaked, lithium prices stayed at a relatively high level of about Rmb480,000/t (Exhibit 4). As battery cost accounts for around 30% of the cost of an EV2, high metal prices have imposed great margin pressure on both EV companies and battery manufacturers, which has been reflected in their quarterly earnings. Some Chinese battery makers managed to confront rising commodity cost pressure by renewing and restructuring contracts. Korean battery makers were relatively better protected due to long-term contracts and a better price pass-through mechanism. 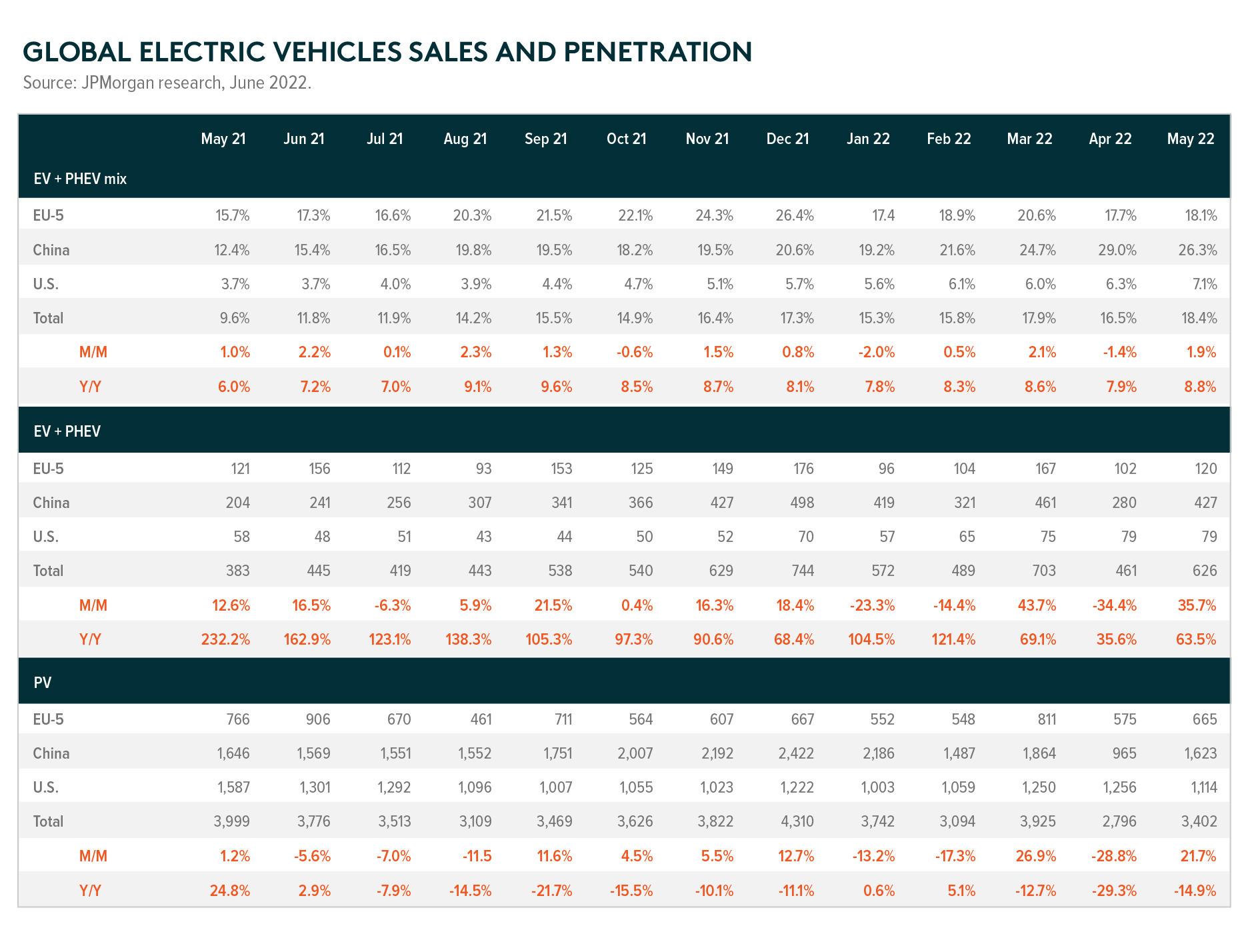 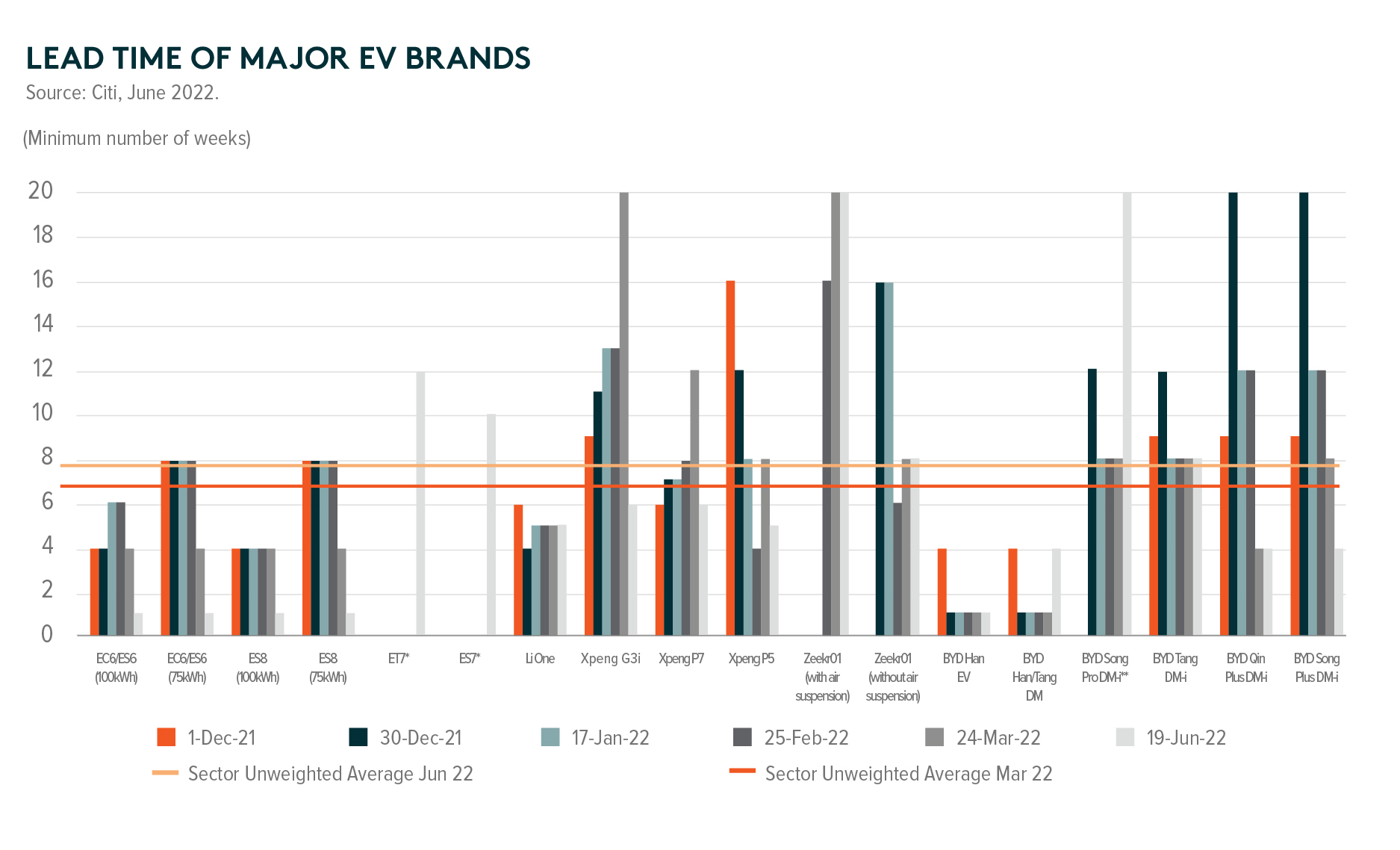 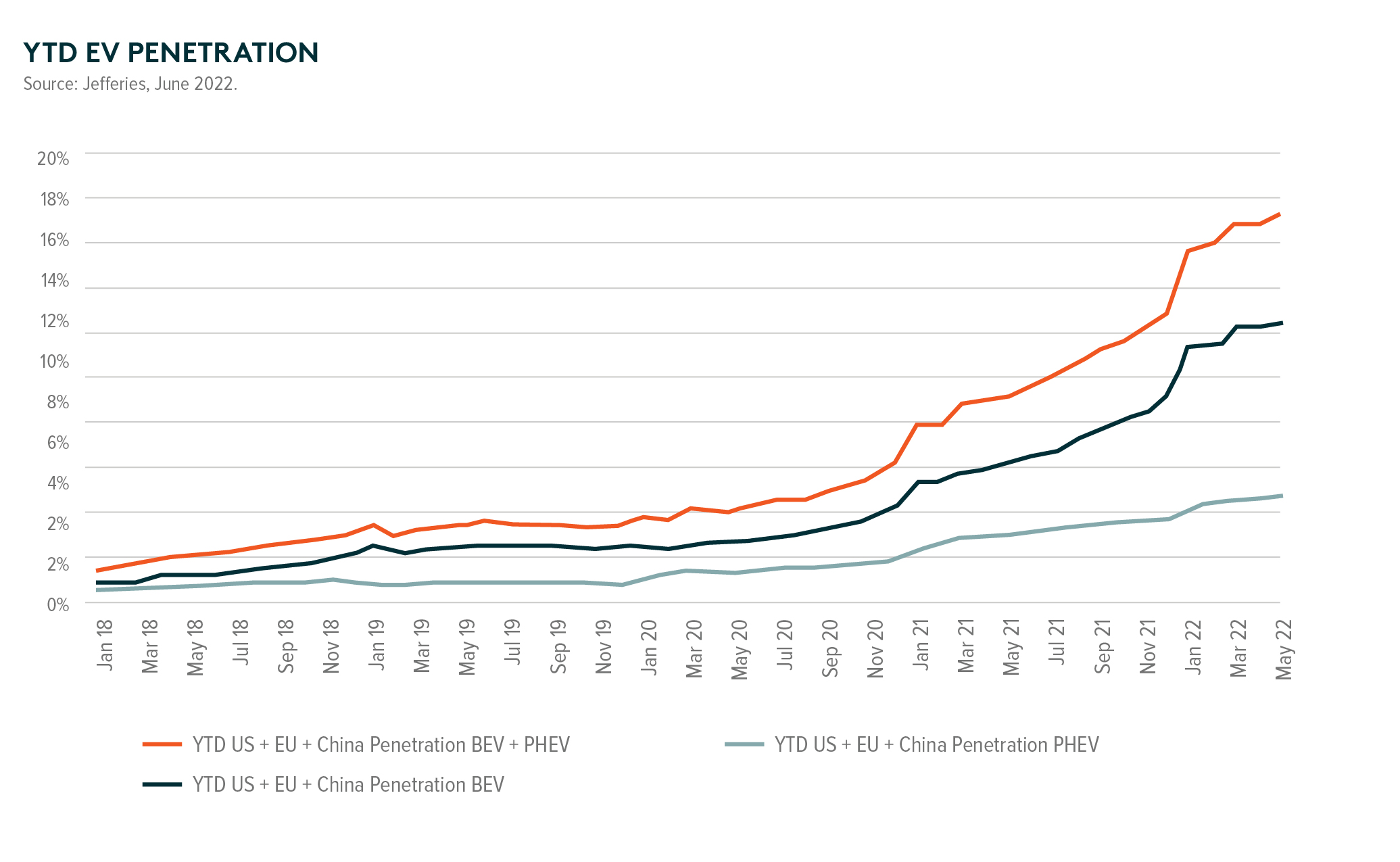 We believe electric vehicle sales in China will remain strong till the end of the year on the back of national and local stimulus policies. Consumers will likely shift their car purchase decision earlier to this year when favorable policies are still available, which means we may see a deep decline in sales in 2023 if the subsidy exits. The good news is that an extension of subsidy or purchase tax exemption is under discussion at present.

For the US and Europe EV sales, while the current situation is more favorable to EVs compared to gasoline-powered vehicles due to high energy prices, the global economic slowdown could dampen auto purchase interest. According to a survey conducted by the University of Michigan in May, consumers expressed record low sentiment toward the purchase of a new vehicle, citing high prices and rising interest rates.

It could be difficult for battery makers in the next twelve to eighteen months. Cost inflation pressure may ease after Q3, but competition will become more fierce since most of the major players have announced aggressive expansion plans for the next three years. Some claimed their new capacities are backed by orders from major OEMs and they are cost efficient thanks to the integrated supply chain. However, gross margin declines in Q1 2022 showed that they did have difficulties passing costs to OEMs.