Implication of import quotas on the agricultural industry, from the China-US trade deal

The Agreement So Far

Agriculture lies at the very heart of the Phase One Economic and Trade Agreement between the USA and China. The entirety of chapter 3 and a quarter of chapter 6 of the formal phase 1 agreement was solely devoted to agriculture-related issues, representing 29 (page 3-1 to 3-21, 6-3, and 6-15 to 6-22) out of 94 pages of the written agreement. Chapter 3 dealt with principals of the bilateral trading relations between the US and China vis-à-vis food and agriculture regulations and set out exceptions to the planned increase of Chinese purchases of US agricultural products. The policy commitments contained in this chapter are not drastically different from the resulting agreements between China and the WTO. On the other hand, chapter 6, which specified the amount of purchases China has promised to make, is much more substantive. According to chapter 6, China would, in the next 2 years, make an aggregate USD 32bn (12.5bn in 2020, 19.5 in 2021) worth of additional purchase on top of the 2017 baseline in oilseeds, meat, cereals, cotton, seafood, and others categories. However, the released version of chapter 6 does not shed any light on exactly how much of the USD 32bn of additional purchases would fall in each category. In context, China purchased USD 23.8bn of agricultural produce from the US, and this two-year commitment represents a 34.5% increase. This gives rise to much skepticism from international trade experts’ of whether China could really fulfill such a large increase in purchases in the next two years. For the rest of this note, we shall assume China faithfully executes the terms of this phase 1 deal. 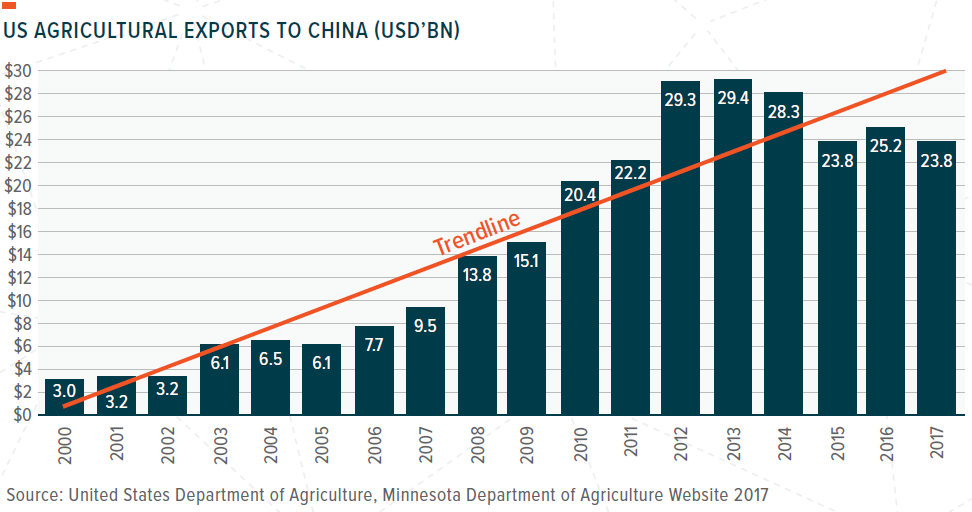 Due to the drastically varying sizes of China’s agricultural sub-industries, the USD 32bn additional purchase commitment may be seen as a necessary act. Although the formal agreement and details of the breakdown have been kept tightly under wrap, the office of the US Trade Representatives (USTR) has published its projections of incremental purchases for key agricultural segments:

USTR expects pork import to increase from USD 700mn to USD 1.7bn in 2 to 3 years’ time, which implies a 143% increase. While this is a huge increase, it is unlikely to have any real impact on the domestic pork market. China accounts for 50% of the world’s pork consumption and has the largest pork market by any measure. In 2017, China produced and consumed 53.4 million tons (mnt) and 54.8mnt of pork respectively, with the gap being plugged by pork imports. Among China’s 1.4mnt of net pork imports in 2017, US only accounted for less than 6% of volume share, which was much less than EU’s 54% volume share. US’ 6% volume share of China’s pork import is also much lower than its approximately (c.) 30% volume share of global import. Therefore, even if China’s pork import from US were to increase 143% on the 2017 base, one of two outcomes could come to pass at PRC government’s discretion:

In either case, the incremental pork purchase from US would not have material impact on China’s domestic pork industry.

Perhaps as a result of China’s overwhelming pork demand, it is the only agricultural segment for which USTR made concrete projections. However, rough estimates for other segments paint a very similar picture of negligible impact to China’s respective domestic agricultural sub-industry.

For example, less than 0.1% of China’s 1.2mnt beef import was purchased from the US, and USTR expects exports to China to reach USD1bn in 3 years’ time; after harmonization of import/export regulatory standard (i.e. Codex standards vs. average MRL in other countries). Even if it is assumed that US beef’s Price Cost Insurance and Freight (PCIF) reach parity with the domestic rate in 2018, USD1bn implies 0.1mnt. Yet 0.1mnt would only raise US’ volume share of China beef import to 9%, still lower than US’ global volume share of 13%. Furthermore, this is only equivalent to 1.3% of China’s beef consumption volume.

This document contains the opinions of Mirae Asset Global Investments (HK) Limited (“MAGIHK”) and is intended for your use only.